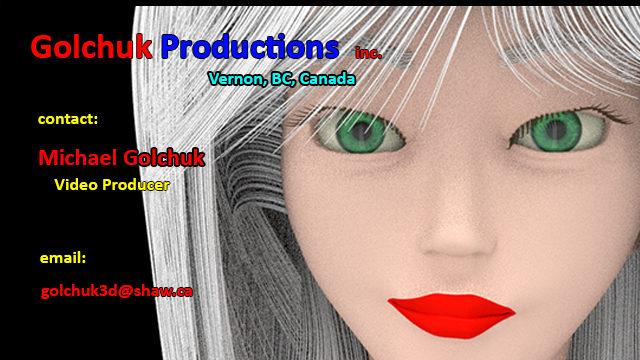 Welcome to Golchuk Productions Inc.. Hello, my name is Michael Golchuk, and this is my studio. I am a short story film producer of original Canadian Content for broadcast, and social media based projects. I produce in 3D Maya, and / or Film, as well as Multi-Layer Compositions, Music, and Special FX.

Currently Under Production for 2022

1) - Film Series: I want To Launch my Model Rockets

I am currently producing a 10 episode series called "I want to Launch my Model Rockets" which is due to be released sometime in late spring or early summer 2022. The series focuses on building, launching, tracking, and the recovery of mid size class E, F, and G model rockets. All rockets are equipped with an on board HD Camera and Altimeter, with parachute recovery, and have an estimated flight altitude of 2600 feet or half a mile high. We have 7 rockets of various designs to launch, and everything depends on the Launch Day itself which is the last segment to be filmed in this series. Launch Day is an arbitrary day which is after the snow fall and before forest fire season, on a sunny, windless day. Whenever that day comes, we launch and film. We will also show you how to afford-ably build your own class E launch pad, complete with wireless remote launch button, and safety key design. To be released in the Summer of 2022. Produced by Michael Golchuk

Believe it or not, I built this studio so I can record my own music and then produce the video for each of the songs. I have written and played my music in a basement band for years, and being a fair judge, I would say that some of the songs are worth producing. So, these days I am in the studio writing and recording 10 songs for an album, so far - with no name. Album Release Date: Fall 2022. Video Release Date: Summer 2023. Produced by Michael Golchuk

In this 10 episode series we will show you how to build your own Indoor Growing Environment. With the price of food skyrocketing these days, you may wish to grow some of your own food, indoors, all 12 months of the year. With today's technology you can afford-ably do that, and we are here to show you how. In this series you will learn how build your own Environment, learn about your Environment, learn about the vegetation that you want to grow, and start planting your crops. You can grow anything in these Environments. A proper growing Environment has to control all aspects of the growing cycle, which is light, food, water, fresh air, heat and temperature control , pest control, and odor control. This series is due to be released in late summer of 2022. Produced by Michael Golchuk

Another 10 episode series. Here I am going to teach people how to play the Guitar, write their own music, and how to play with other musicians in a band, or multi-track record yourself. The musical content for the series will be the songs that I have written and produced. I find it easier to teach music as I am teaching you how to play "my" music. We also expand into Lead Guitar, Bass, Keyboard and Drums, as well as, how to multi-track record. To be released in the Fall of 2022. Produced by Michael Golchuk

My previous company, Golchuk Digital Media Inc. was a video production, web design, graphic design, e-commerce design, type of company. We created the Niagara attractions.ca website which operated from 2000 to 2010 offering 40 Online videos of the attractions of Niagara Falls, Ont.. We sold Online tickets for the Niagara Parks Commission, and Safari Niagara. We had an 1.2 million unique visitors annually and we were page one at the top of Google for "Niagara Attractions" keywords for 10 years. Niagara Attractions.ca was shut down in 2010 with the birth of social media, utube, and universal broadband. 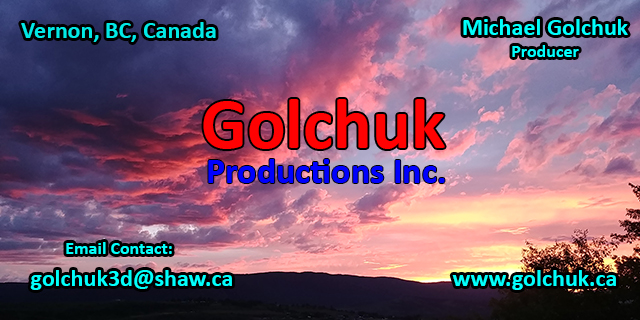 The best way to initially get in touch with me is by email. golchuk3d@shaw.ca .
From there we can establish phone, txt, and Zoom contacts.

Center for the Arts and Technology, Kelowna, BC.